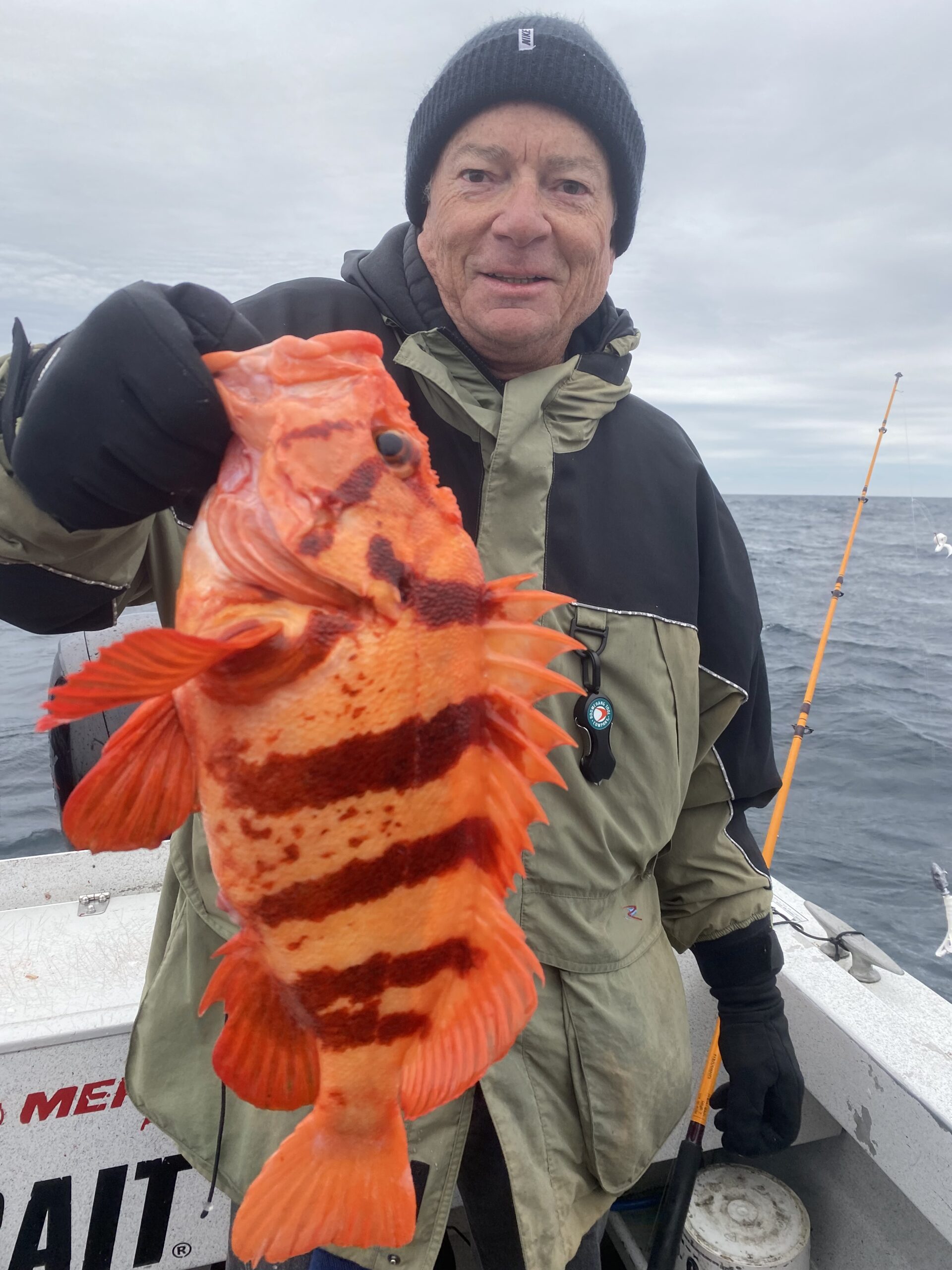 Our trips to the Point St. George Reef Lighthouse, located offshore between Brookings and Crescent City, have been a huge hit with our customers. During recent trips this fall, in between storms, we have been catching limits of nice rockfish, and a very nice grade of lingcod. Anglers often see a wide variety of rockfish during these trips, with black, blue, canary, vermilion, China, copper, quillback and even tiger rockfish.

During a period of nice weather in late November, we were able to run several trips to the lighthouse area aboard our six pack boats, including the Miss Brooke and Bout Time. During the fall months, lingcod fishing is often wide open at the lighthouse, and aside from limits, large numbers of keeper-size lingcod are also released.

One of the main draws of the lighthouse is the fast action, and wide variety. With each fish that comes up, anglers don’t know if it will be a cabezon, large rockfish, lingcod or even a halibut. The massive schools of fish at the Point St. George Reef are unmatched and rival the quality fishing in remote parts of Alaska.

The lighthouse itself is located 11 miles south of the Chetco River jetties. Our charter boats fish near the lighthouse, or travel further south to fish near the Dragon Channel, Great Break, East Break and other productive parts of the reef.

Similar to our other charters, we start out with light spinning tackle to catch rockfish, usually fishing as shallow water as possible. It is easer to release rockfish in shallow water. If they are caught in deeper water, we will use a descending device to get the rockfish safely back to the bottom, deceasing release mortality of these prized fish.

To fish the lighthouse area, the Brookings Fishing Charters boats are licensed in Oregon and California. We depart the Port of Brookings, in Oregon, but fish in California waters. Our boats have a California Commercial Passenger Vessel License and each angler must have a California sport fishing license. One-day licenses are available for $17. The fish are landed in Oregon, so an Oregon license also is required. The extraordinary fishing near the lighthouse makes the extra charter licenses, and angler licenses worthwhile, with unmatched fishing and the potential for trophy size fish.

The lighthouse area is open May-December. The rest of the year, we focus on other hot spots, such as Mack Arch, House Rock and the productive reefs close to the Port of Brookings Harbor.

Our charter boat captains have extensive experience fishing near the Point St. George Reef Lighthouse. Capt. Mick and Capt. Sam both grew up in Crescent City, and have been fishing the lighthouse area their entire life. Mick used to fish commercially near the Point St. George Reef, but now works year round, full time as a charter boat captain and fishing guide. Capt. Andy and Capt. Travis grew up in Brookings, and also have decades of experience fishing local waters, including the lighthouse area. Capt. Rye, Capt. Rich and Capt. Michael also have extensive experience fishing the lighthouse. Each captain has their own “hot spots,” and our charter crew is in constant communication with each other to make sure each boat is on the bite.

New for 2022, we will be offering combination lighthouse and ocean salmon trips during the month of June. We also offer halibut and lighthouse trip combos in June and September. Depth restrictions limit the halibut combos other times of the year.

The Point St. George Reef and lighthouse are a fascinating part of local history. The lighthouse was built in 1892 after several tragic shipwrecks in the Point St. George Reef. Towering 146 feet above the ocean, the lighthouse can be seen from Brookings and Crescent City. The reef is part of what was named “Dragon Rocks” by Sir Francis Drake. On July 30, 1865, during a gale, the 220-foot Brother Jonathan, carrying 244 passengers, struck the reef and sank. Only 19 people survived. A fortune in gold went down with the ship. Most of the gold is said to still be at the bottom of the ocean near the lighthouse, although a fisherman claimed to have caught 22 pounds of gold bars in his net in the 1930s. The sinking of the Brother Jonathan played a key role in the decision to build the lighthouse on Northwest Seal Rock.

The lighthouse cost $752,000 to construct in 1892, equivalent to $22 million today, making it the most expensive lighthouse ever built in the United States. The lighthouse was major construction feat. Several people died during construction and more were killed while serving at lightkeepers.