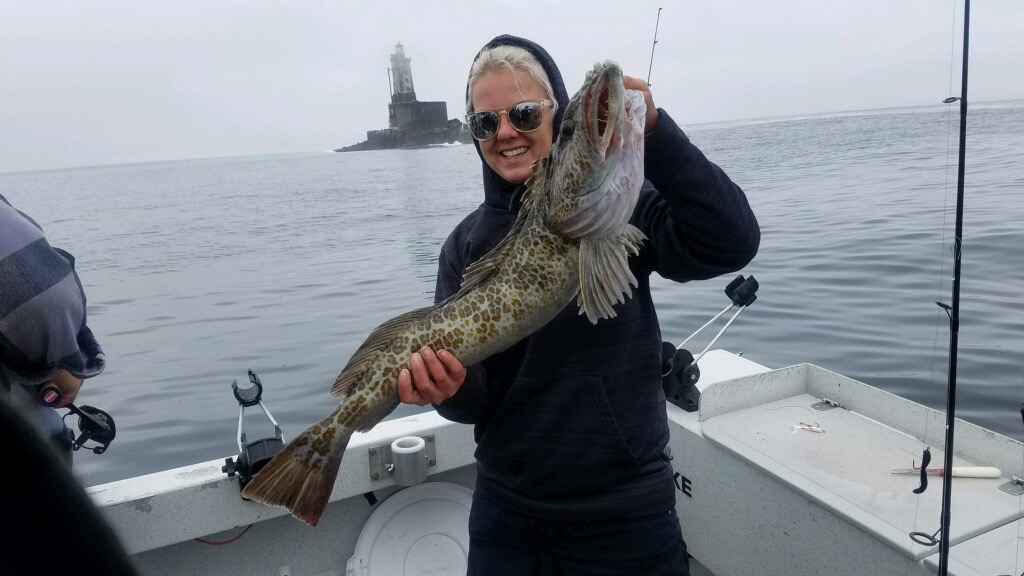 Brookings Fishing Charters is pleased to announce it is now offering long-range fishing trips to the Point St. George Reef and Point St. George Lighthouse, where the average size of rockfish and lingcod is often much larger than waters closer to the harbor, the action is usually fast and furious, and the experience of fishing in the historic area is something anglers won’t soon forget.

Capt. Andy Martin, owner of Brookings Fishing Charters LLC, said he decided to begin offering the lighthouse trips as part of his company’s commitment to provide the best fishing opportunities possible out of Brookings. “The Point St. George Reef has some of the most prolific rockfish and lingcod populations in our region,” Martin said. “It offers the best chance at a trophy lingcod, trophy vermilion or canary, and trophy yelloweyes. The reef is full of life, and such an amazing place to fish.” The ability to fish near the lighthouse required a substantial investment by the Brookings Fishing Charters vessel owners for permits and licenses. The reef is located across the state line in Northern California, requiring out-of-state commercial fishing vessel licenses and commercial passengers fishing vessel permits for charter boat operators.

The lighthouse is approximately 11 miles from Brookings, almost straight out from the harbor. The reef and best fishing is a little further, in what is known locally as the “Dragon Channel,” a lingcod and trophy rockfish infested area of the reef. Swift currents, sudden depth changes, and an extremely rugged undersea terrain provide ideal habitat for big rockfish and lingcod. Oldtimers tell stories of lingcod between 50 and 70 pounds, and each season plenty of trophy lings are caught.

To fish the lighthouse area from Brookings, anglers must possess Oregon and California fishing licenses. The fish are caught in California, but landed in Oregon. Only a limit legal in Oregon can be landed in Brookings, so the limit is seven rockfish and two lingcod. Because they are caught in California, only four black rockfish and three canaries can be part of each limit. “Fortunately there are a lot of large vermilion in the area,” Martin said. “The canaries also are huge compared to what or normally caught closer to Brookings.” Boat operators must use caution to keep their vessels outside of marine protected areas, or “reserves” while fishing. Skilled navigation also is required for fishing in the minefield of wash rocks and other dangers near the reef and lighthouse.

Lighthouse trips are offered on the Miss Brooke with Capt. Travis, Capt. Andy and Capt. Michael, and The Dash with Capt. Mick and Capt. Rye. All are local captains with substantial time fishing local waters. Capt. Andy and Capt. Travis grew up fishing the local area, while Capt. Mick for years operated his own commercial fishing vessel fishing for lingcod and rockfish near the lighthouse out of the Crescent City Harbor. The captains also fish the Smith River and Chetco River during the fall and winters for salmon and steelhead, and are intimately familiar with the history and heritage of the lighthouse and local waterways.

The Point St. George Reef and lighthouse are a fascinating part of local history. The lighthouse was built in 1892 after several tragic shipwrecks in the Point St. George Reef. Towering 146 feet above the ocean, the lighthouse can be seen from Brookings and Crescent City. The reef is part of what was named “Dragon Rocks” by Sir Francis Drake. On July 30, 1865, during a gale, the 220-foot Brother Jonathan, carrying 244 passengers, struck the reef and sank. Only 19 people survived. A fortune in gold went down with the ship. Most of the gold is said to still be at the bottom of the ocean near the lighthouse, although a fisherman claimed to have caught 22 pounds of gold bars in his net in the 1930s. The sinking of the Brother Jonathan played a key role in the decision to build the lighthouse on Northwest Seal Rock.

The lighthouse cost $752,000 to construct in 1892, equivalent to $22 million today, making it the most expensive lighthouse ever built in the United States. The lighthouse was major construction feat. Several people died during construction and more were killed while serving at lightkeepers.

“Fishing near the lighthouse is comparable to the trips I used to take customers to in the Gulf of Alaska and Prince William Sound when I used to run charter in Seward, Alaska, and Glacier Bay, Alaska,” Martin said. “It is a world-class fishery, and Brookings is the ideal harbor to visit it from.”