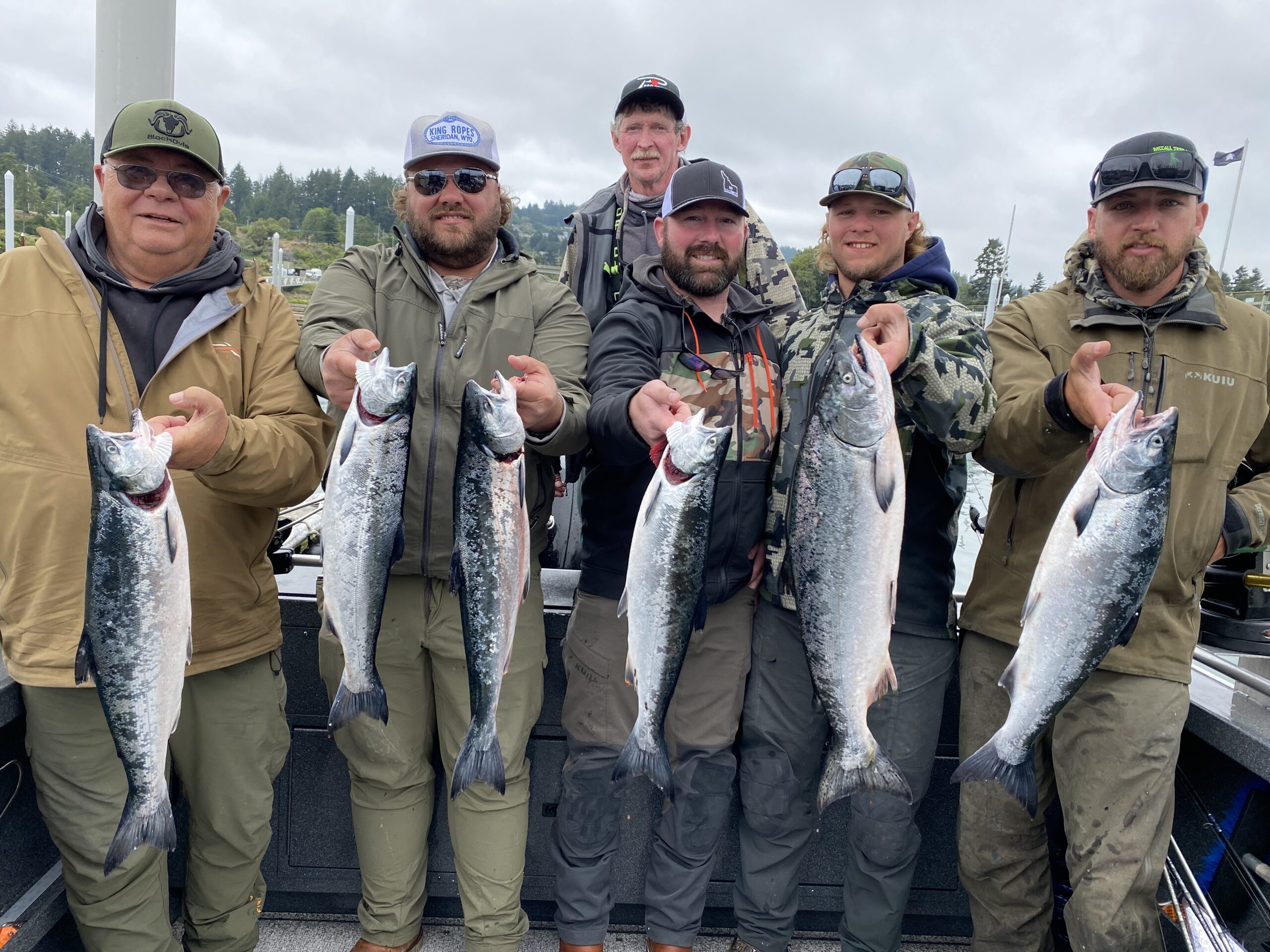 Salmon season heats up off of Brookings

BROOKINGS, Ore. (June 30, 2022) – After a fairly slow start to the ocean salmon season offshore from Brookings, the action heated up the second week of the season, with good catches of coho and kings. The Brookings Fishing Charters boats have been the top-producers among the sport fleet, bringing in limits or near-limits of salmon, while also releasing big numbers of shaker kings and wild coho.

Salmon season began June 18, but only hatchery coho could be kept. Starting June 25, wild or hatchery kings, along with hatchery coho, can be harvested. Fishing started out slow, in part because of windy weather, dirty water conditions, and the bulk of the fish holding well offshore. But early this week, the salmon moved a little closer to shore, and massive schools of bait arrived. The salmon fishing has been wide open at times.

Fishing also has been very good at the Point St. George Reef Lighthouse, where the Brookings Fishing Charters fleet heads during its long-range trips. The lighthouse area has been producing an excellent grade of big black, canary, vermilion, copper and other rockfish, and lingcod close to 30 pounds. A few large lingcod also have been caught recently at Mack Arch north of Brookings.

For the salmon, Capt. Travis, Sam, Michael, Mick, and Rich also have reported their best fishing trolling anchovies close to the surface, but in deep water, sometimes 4 or 5 miles offshore. Some trips are yielding more than three dozen hookups, with lots of fish lost because of barbless hooks. The hatchery-to-wild ratio for coho salmon is nearly 50-50, meaning half the silvers landed can be kept. There are big numbers of shaker kings less than 24 inches, and then keepers from 5 to 15 pounds. Each day, fish in the upper teens also are being caught.

Salmon season runs through mid-August out of Brookings. The best fishing is generally the last week of June and first few weeks of July, meaning peak season is right now!

Lingcod and rockfish can be kept year round out of Brookings, but the summer months often lead to high catch rates, as the calmer weather this time of year results in better fishing. The Brookings Fishing Charters boats, including the Miss Brooke, Kraken, Nauti-Lady, Dash, Papa B and Bout Time, use light spinning tackle to target rockfish and lingcod. The light tackle adds to the thrill of catching these tasty fish.

Albacore tuna season begins in the summer, with late July or early August generally the most productive time to target tuna, as they move closer to shore.

To learn more about fishing charters out of Brookings, visit www.brookingsfishing.com or call (541) 813-1082.